SINGAPORE - Home-grown novel foods such as cell-cultured and plant-based meats could soon feature more regularly on menus in Singapore.

Over the past two years, more than 15 alternative protein start-ups have set up base in Singapore, Ms Bernice Tay, director of food manufacturing at Enterprise Singapore (ESG) told The Straits Times.

"Local food manufacturers such as Tee Yih Jia and Growthwell have also started to invest into research and development and production of plant-based meat products in response to evolving consumer demand," she added.

More firms here are entering the emerging field of alternative proteins amid growing global consciousness about the massive carbon footprint of rearing livestock for food, which produces about 15 per cent of all global greenhouse gas emissions, according to the United Nations Food and Agriculture Organisation.

Alternative meat products also saw a 306 per cent jump in consumer reviews on the app.

Singapore became the first country to approve the sale of a cell-cultured product last December. The cultured chicken bites by Californian firm Eat Just were made available for home delivery via Foodpanda last Thursday, until May 6.

A report by The Good Food Institute, which promotes protein alternatives, revealed that a record US$3.1 billion (S$4.1 billion) was invested into alternative proteins globally last year - three times the capital raised in 2019.

Global food ingredient and flavour supplier ADM last Thursday launched its plant-based innovation lab in Biopolis to offer solutions and expertise in the areas of proteins, texturing and flavour, to help firms enhance their products and cater to the Asian palate.

Dr Vinayaka Srinivas, who comes from the life sciences field, co-founded local start-up Gaia Foods in 2019 to develop cell-based cuts of pork, beef and mutton. Seeing the popularity of Impossible burgers then, he saw the potential in developing alternatives to slaughtered meat. 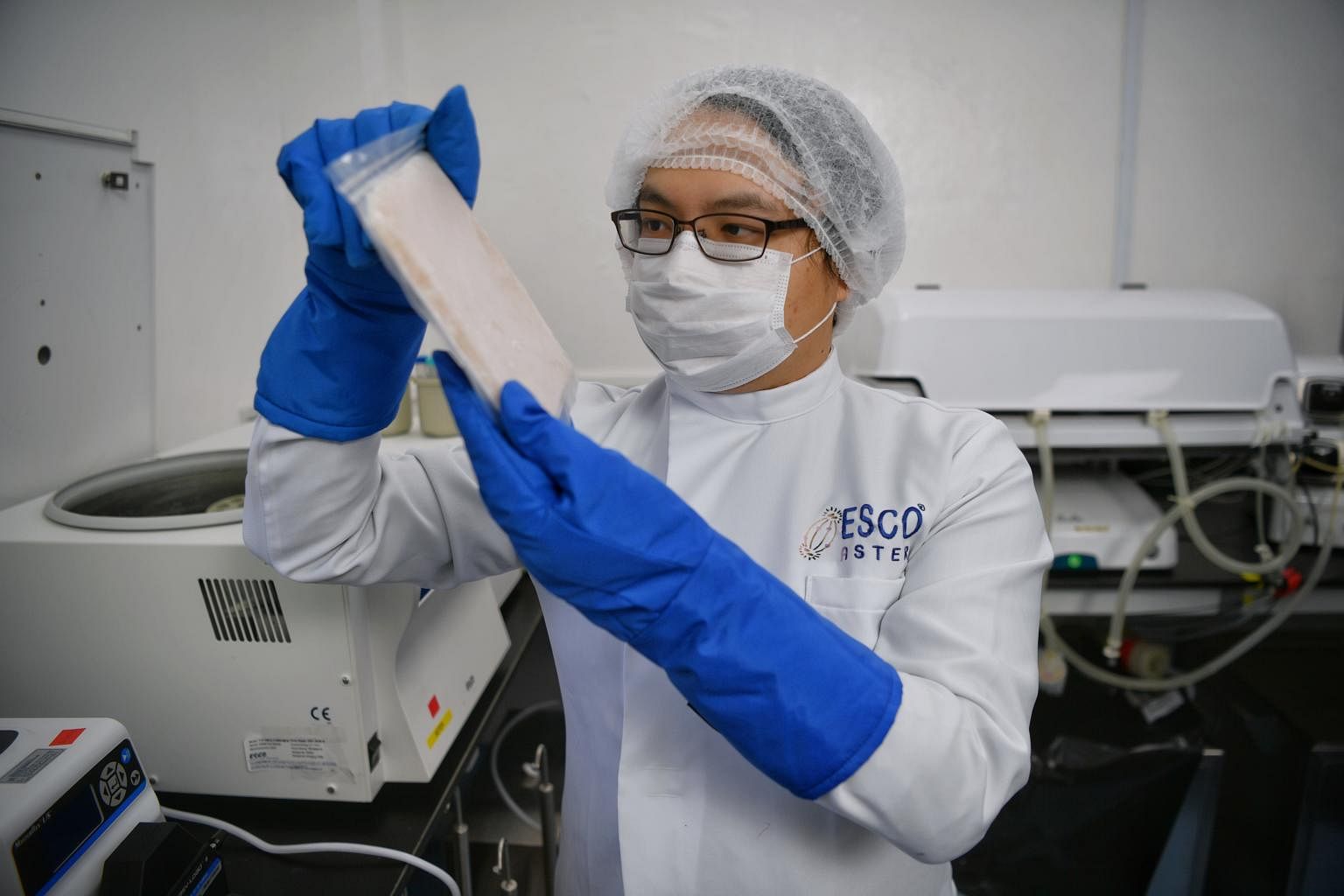 CEO of Esco Aster Lin Xiangliang with a packet of cell-cultured meat at his lab on April 21, 2021. ST PHOTO: CHONG JUN LIANG

MORE ON THIS TOPIC

Most cultured meat start-ups here are still at their research and development phase, and will need a platform to make more food - especially if they do not have their own pilot facilities, said Mr Lin Xiangliang, chief executive of local biotech company Esco Aster.

The firm, which develops vaccines, cell and gene therapies, and diagnostic products, is working to get a Singapore Food Agency license for one of its labs to produce novel food ingredients.

This will enable it to help food-tech firms mass produce alternative proteins affordably.

Professor William Chen, director of Nanyang Technological University's Food Science and Technology programme, said Singapore is one of the leading countries in the alternative protein space, mainly because of its strong biomedical core.

"The growth potential is certainly bright if we can export the technology for alternative proteins to South-east Asia and beyond. Singapore can be positioned as a hub for these innovations."

Local start-up Gaia Foods is developing meat products using just muscle and fat cells from cows, lambs and pigs. This does away with the need to slaughter animals for their flesh. Here is how the company does it.

• Small tissue samples, each about 0.2g, are collected from young cows, pigs and lambs in Malaysia and Australia.

• Muscle and fat cells are separated from the tissues through a process known as chemical digestion, where enzymes digest other components of the tissue, leaving behind the cells.

• The cells are multiplied in laboratories abroad, before they are shipped to Singapore in small vials.

• Cells are placed in petri dishes and housed in an incubator, a controlled environment that mimics the biological conditions of an animal, such as in terms of temperature.

• The cells are nourished with a nutrient broth containing substances such as sugars, vitamins, amino acids and salts. The broth costs about $300 to $400 a litre.

• The cells multiply with the help of growth factors found in bovine serum, which is added to the nutrient broth.

• Bovine serum, harvested from the blood of foetal calves, is currently the most widely used serum for cell culture.

• Not only is it expensive, costing between $800 and $1,000 a litre, but also its use in a product that aims to reduce the need to slaughter animals may seem ironic. To replace this, Gaia Foods is planning to produce its own growth factors using plants and yeast.

• The cells growing in petri dishes will be transferred to a 500ml bioreactor. Immersed in more nutrient broth and serum, the cells multiply more.

• Once the cells reach a sufficient density in the bioreactor, they are harvested.

• The cells are separated from the broth using different techniques, including spinning the mixture in a centrifuge.

• The process from growing the cells to harvesting them takes about four to six weeks.

• To go beyond minced meat and create textured meat such as steak or pork belly, the cells must grow in and around an edible and porous scaffold, usually made of modified corn, soya or pea protein.

• The cell paste, grown around a small scaffold, is immersed in a different broth that allows the cells to turn into a connective tissue, like a piece of muscle. This takes about two weeks.

• At the same time, harvested fat cells are also added to the scaffold to turn into tissue. The amount of fat cells added depends on the fat content of a cut of meat.

• A scaffold used to make steak has to be made of a harder material, compared with one used to make softer meats like pork belly or chicken breast.

• Gaia Foods will then work with food technology experts and chefs to enhance the meat’s texture and flavour, so it is ready to be cooked.